Cookies are small pieces of text saved by websites to your computer. Cookies are how your computer remembers things you’ve already done on the internet and are an important part of making modern websites work properly.

Because cookies may contain information about your browsing habits, some people prefer to turn them off entirely. However, turning off cookies can prevent websites from working the way you expect.

These cookies collect information on your browsing habits to help our advertising partners show you more relevant ads.

These cookies help social media sites understand your likes and dislikes so they can show you more relevant content. They also make it easier to share contents from other websites such as ours to your social media profiles. 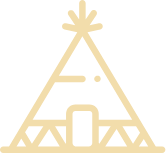 According to tribal legend, Nimiipuu, “the people,” were created in North Central Idaho at the dawn of time. There is evidence dating back more than 12,000 years of indigenous people inhabiting the region. French Fur Traders gave them the name Nez Perce when they began trading with the tribe.

The Nez Perce people are credited with saving the lives of the Corps of Discovery Expedition, who entered this area hungry and without adequate shelter from the harsh winter. The explorers would likely have suffered a tragic ending if not for the assistance of Nimiipuu. The tribe provided the members of the Lewis & Clark Expedition food, shelter and guidance for months while they were stuck here.

Today, the Tribe hosts PowWows and other community events in various locations throughout the year. And Tribal enterprises include forest products, limestone quarry operations, two popular casinos, an RV park, convenience stores and the Red Wolf Golf Club. Travelers are welcomed today just as the Nez Perce welcomed the Corps of Discovery Expedition nearly 200 years ago.

The rich history and customs of Nimiipuu are featured at the Nez Perce National Historical Park’s interpretive center and museum. The park includes 24 separate sites and offers informational programs to educate people about the tribe.

Get your monthly guide to Lewis Clark Valley events, attractions and discounts.